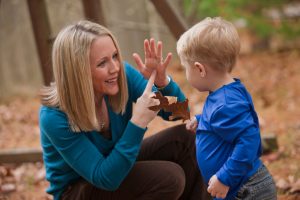 American Sign Language allows people of all different ages to connect with one another.

From medical exam rooms to speeches to church services, American Sign Language can be found in the most extraordinary places. It has helped people heal when they are sick, find what they are searching for, and helped neighbors communicate. But have you ever wondered where this language system came from? Let’s take a look at the origins of American Sign Language.

It Started in Connecticut

American Sign Language (ASL) begin its life in Hartford, Connecticut in 1814. Dr. Thomas Hopkins Gallaudet was a local minister in his Hartford community but in his free time, he enjoyed going over to his neighbor’s house. His neighbor, Mason Fitch Cogswell, had a nine-year-old deaf daughter named Alice Cogswell. Although Alice could not speak, Dr. Gallaudet realized she was actually very smart despite her limitations and wanted to teach her to how to communicate. During this time, Dr. Gallaudet was slightly successful but did not know the proper way to teach a deaf child. After a conversation with Cogswell, Dr. Gallaudet gained community support and rounded up enough money to travel to Europe where there was a history of deaf education.

While in Europe, Dr. Gallaudet met several professors including Abbe Sicard, Jean Massieu, and Laurent Clerc. Abbe Sicard was the successor of Abbe de I’Epee at the National Institute for Deaf-Mutes. Clerc and Massieu were once the students of Sicard but went on to become accomplished deaf educators in their own right. Dr. Gallaudet studied their teaching methods and even took private lessons with Clerc to strengthen his skills. When Dr. Gallaudet had finished his training and was ready to set sail back to America, he asked Clerc to accompany him and help him start a deaf school in America. Clerc agreed and the two arrived in America and opened the American School for the Deaf, the first free public deaf school in the U.S., in 1817. As the students came from around the country, many of them brought a unique signing system with them, which combined with Langue des Signes Française, or French Sign Language. By 1863, 22 deaf schools in the U.S. had been established and many of them were founded by former students of the American School for the Deaf. As the language spread throughout the country, students went on to lead fulfilling lives in communities around the nation. As the language has progressed, ASL has developed into a number of phonemic components including movement of the face, torso, and hands. Just like any other language, ASL takes years of practice and dedication to master. But for those of us who do not have the time to mast this language, there is always interpreting by Family Service Foundation.

Family Service Foundation, Inc. has been serving the greater Maryland area since 1936. This nonprofit organization helps Maryland residents across a span of different areas such as mental health, developmental disabilities, and substance abuse, and provides interpretation for deaf and deaf-blind individuals. To learn more about American Sign Language or other services, visit here. Do you “Follow” and “Like?” Be sure to stay active on our official pages on Facebook, Twitter, Google+, and Pinterest today!   Source